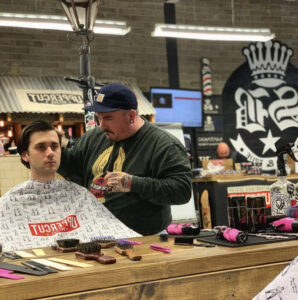 It was especially nice for us to hear that former SB Barbering Academy student Paul Lofthouse has just been named as the winner of the Sam Wall Unsung Hero Award at the Collective Pride Awards, sponsored by Professional Beauty.

Launched by The Lions Barber Collective, the awards honour the hard work of those who not only deliver exceptional service, but go out of their way to help others in a times of crisis and need, thus making a real difference to someone’s life.

Paul won the Sam Wall Unsung Hero Award for work he has done in mental health diagnosis and treatment, suicide prevention and suicide bereavement services. Paul lost his father to suicide, and has dedicated a large amount of his time to working with Hospitals and other services in Hertfordshire & Essex.

Well done Paul from everyone at SB Barbering Academy.